To The Future, To Love, And To Paradise

I met up with a new but really good friend today. He was leaving town for good and even though he had a million things to do, he wanted us to meet up. We met up, walked around – which involved lots of meandering through throngs of tourists and avoiding been run over by cyclists who would knock down an old lady in a minute without remorse since they are really the ones “saving the world” and “creating green energy”. At the end of the evening, he hugged me and said he was proud of what I had managed to achieve in the past 18 months. I brushed it off but when I got home, I realised that I am constantly looking forward, constantly thinking about how to advance my goals that I never stop to celebrate the things I have managed to do. So today I opened a bottle of bubbly, a gift that I received at Christmas and drank it down alone, while listening to Seal, who happens to be one of my favourite artists and whose song supplies the title to this post. While I’m the first to list the disadvantages of drinking alone, today is a ME day. And I’m not going to be apologetic about it.

While it may be a normal/boring/crazy/terrible day for you, have a drink today for me, to the future.

Since the infamous bill become law recently, many LGBT and human rights activists have pulled together resources to try to fight the law. Interestingly enough the first person to attempt to bring down the law is  a straight ally, Teriah Joseph Ebah, who does not live in Nigeria. The case was however dismissed as the court said the plaintiff could not prove how the law harmed him personally and hence he was not qualified to bring the case to the court. From what I’ve been told, this is not at all the end of the line, even though it is a setback of sorts but it leaves open the door for a future case. The clear problem is that the only ones who are affected by this ruling may have unique difficulties in actually bringing this case to court since it means that one has to admit to being gay for the law to be seen as a source of harm and coming out carries certain risks – loss of employment, verbal and physical attacks among others. However LGBT activists seem positive and I really hope z new, stronger case is made soon. Read the rest of the story here.

Sodomy In The News: The Gay Medical Doctor And The 16 Year-Old Student

There’s a news story making its way through the Ghanaian media about a medical doctor who had sex with a senior high school student and infected him with HIV. The major legal issue is that they had sex when the boy in question was 15 and therefore under the age of consent. Currently homosexuality is one of the most controversial and sensational topics that one will find discussed in the media and by the public and usually the LGBTIQ people involved are usually young, flashy and feminine gay men who are bold enough to come forward and speak their mind. This is the first time in a long time someone considered a ‘respectable’ member of society has been involved in such a story.  END_OF_DOCUMENT_TOKEN_TO_BE_REPLACED

I met him online. His profile was empty and I was very wary in the beginning but we connected very quickly. He sent me some really interesting pictures – while he was good-looking, he seemed like he’d be comfortable in an office, outdoors or in a psych ward. Very versatile.  We finally met up for coffee and spent a couple of hours just talking. As he was leaving, he shook my hand then held on to my shoulder, rubbed for a minute like he couldn’t let me go and looked into my eyes. I froze. I have never been one for public displays of affection and when it comes to PDAs of the gay kind, I shut down entirely. But when he touched me, right in the middle of a train station, I felt like there was no one else there – only the two of us. I looked into his eyes and saw the longing I felt for him being returned. I didn’t want him to let go either. We met up for coffee many times after that and finally started dating. We both liked each other but neither was in a place where a relationship of any kind was possible, he because he’d recently come out of a relationship where his ex moved to a different country, and I because there are so many things going on in my life now that I am unable to settle down.

While I would never admit to it in public, I believe in the power of connections and would commit to something if I felt strongly enough about it. However like Lady Gaga once said: “If you’re wondering which way to go, remember that your career will never wake up and tell you that it doesn’t love you anymore.” END_OF_DOCUMENT_TOKEN_TO_BE_REPLACED

Posted by D.C. on October 20, 2014 in Love is a Battlefield, Uncategorized

Jackson Irungu, a gay Kenyan stylist and aspiring singer, was beaten up at a club earlier this week in Nairobi. The reason for his assault is said to be his choice of attire and possibly his sexual orientation. He is notable for coming forward as an out gay man in a CNN program documenting the struggles of gay men in Kenya. END_OF_DOCUMENT_TOKEN_TO_BE_REPLACED

The Pope Resigns: Didn’t See This One Coming

Pope Benedict XVI has decided to step down from the highest office in the Vatican come February 28th. This is the first time in nearly six hundred years that a pope has resigned (the last was Pope Gregory XII who did so in 1415 in order to end the Western Schism). According to a Vatican statement, he reached this (very unexpected) decision due to progressive deterioration of his health saying  “after having repeatedly examined my conscience before God, I have come to the certainty that my strengths, due to an advanced age, are no longer suited to an adequate exercise of the Petrine ministry”. Considering the very condemning words he has used on LGBTIQ and his involvement in covering up the shameful incidences of sexual abuse in the Catholic church, I will take the high road and wish him good health. I will however leave you with a picture I received from a friend which made me titter uncontrollably for a good minute. 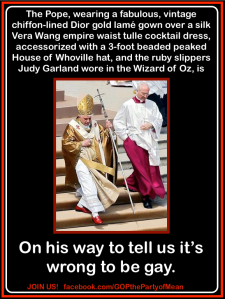 Read more about his resignation on CBC News.

The United Nations General Assembly finally passed a resolution condemning extra-judicial, summary or arbitrary executions including those carried out on the basis of sexual orientation or gender identity. The UAE and Singapore were among the 44 countries that attempted to strip away this new clause but this time their proposed amendment was not supported by the majority.  Ultimately only one country voted against resolution (Iran) but a number of African countries (including Ghana) abstained. I wonder how the delegates reached that decision. It will be interesting also to see how people react to this  (assuming it is covered at all by the local media).

Read more on this on the IGLHRC website here